That night I did the Hotel Rumble–room too hot, room too cold, pull darkening curtains, enter womb of blackness, konk out, oversleep. Breakfast was a “western omelette”: an intriguing rubber mitten with specks of minced pepper and, oddly, potatoes. I slammed some coffee and was off.

I crossed the Delaware with considerably less elan than George Washington and headed into New York. It was gorgeous: 360 degree views of mountains, with the sun rising in the east (and in my eyes).

Then I entered Connecticut and the zen state vanished in a crush of speeding trucks and decrepit road surfaces. It was the Thunderdome–everyone out for him or herself. Forty-five miles per hour through a work zone? Lean in, Grandma! I hurtled around curves and charged up and down hills, cars chewing on my bumper as trucks roared past. Who needs thrilling roller coasters when you can drive through Connecticut?

I bounced into Massachusetts and reached Northampton, a charming town that was not so charmingly short on hotel rooms. A music festival listed as a “must attend” by Rolling Stone magazine meant every possible room was booked. I finally scored a vacancy at a drive-up motel with smoking stanchions outside every room and a parking lot full of pickup trucks and their jolly riders entering rooms with cases of beer. At cocktail hour I went to the ice machine and stood meekly behind a huge guy emptying ice into an equally huge cooler. My gin and tonic that night was an English one: no ice.

My dear father was worried about my driving to Vermont by myself. He pondered how he could accompany me, even though he’s 85 and has given up driving. He gathered his faded maps and we compared them to the Google-suggested route. He was concerned that “a beautiful young woman alone in the mountains” would not be safe. That was touching as I’m not young, not sure about the beautiful part, and completely ignorant of what mountain roads would be like.

Maps are a big deal in my family. They are how you know your place in the world, and how you find curious stopping points that have anecdotal potential. (Every time we drive through West Virginia I threaten my husband with a trip to the national fish hatchery.)  My British uncle, when he wasn’t reading train tables to calculate travel times, was opening topographic maps to confirm hill heights for country walks.

Ordnance Survey maps are more treasured than the Bible. There is a stack of them in the library where I work, neatly organized by UK county, and I sometimes go down there and look at them, knowing that few people seek them out. I am grateful to the unsung librarian who keeps them in order for those–like me–that might.

Confident in the 21st century wisdom of Google, I set out for Vermont. All was well at first: I found one of the best state welcome centers ever–beautiful views, artwork, bathrooms and free coffee.

As soon as I got off the highway, however, my father’s predictions came true. I was a) lost; b) on an unpaved road; and c) feeling like an idiot.

I plowed ahead, unpleasantly aware that I didn’t know how to fix this. Warren Mountain Road? This must be it. Up I went, as the pavement gave way to gravel and the “GPS Not Advised” and “Snow Tires Required October-May” signs appeared. Up I went, in clouds of dust, bouncing over rocks and pot-holes and wishing I’d listened to Dad. It was like a macho LandRover ad except with a Toyota Camry.

Eventually I came down the mountain, road names non-apparent despite Google’s confident listing, and plopped unceremoniously into the town of Warren, Vermont. I emerged non-triumphant, car covered in dust, 30 minutes of panic ebbing into embarrassed relief, and there, there in front of me was a Relais & Chateaux hotel. I couldn’t believe I’d endured the mountain route and taxed my four-cylinder sedan beyond what it was ever built for only to find a luxe hotel that already knew how to get here.

I turned the car around and headed to the address I had for the rental. And it was worth the pain of getting here.

The tiny house was, unlike so much on teh interwebz, exactly what was promised. Right on a babbling creek, completely private, and utterly functional. Forget a room of one’s own. Everyone needs a tiny house of one’s own. 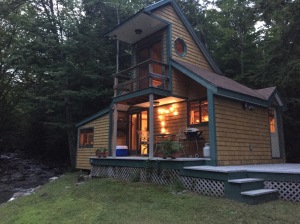 “The Studio.” I put up the twinkle lights 🙂

6 thoughts on “Dad Was Right”